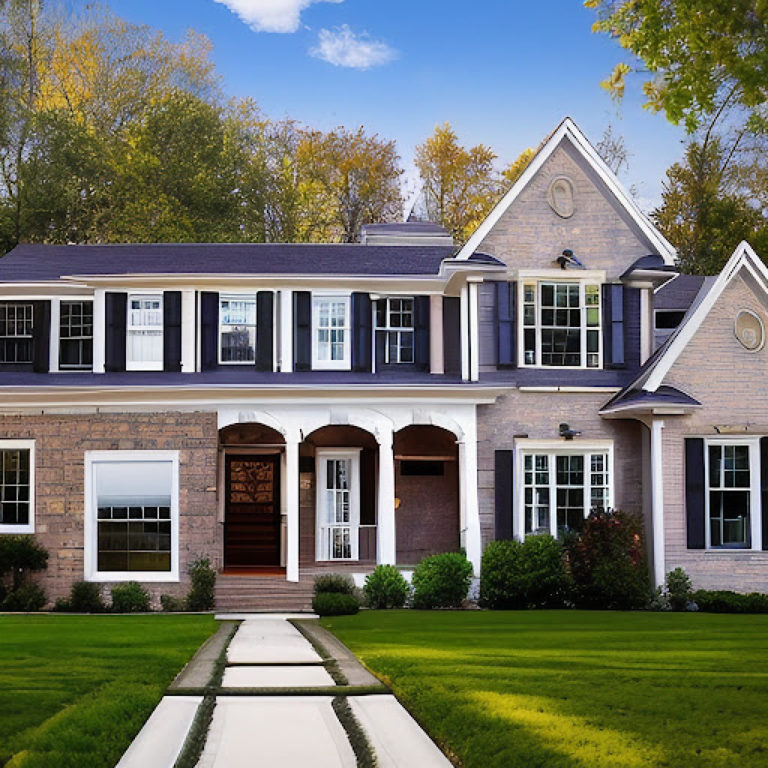 Have you ever dreamed of living in a small, quiet town surrounded by nothing but stunning desert landscapes and picturesque mountains? If so, Tumacacori, AZ, might be the perfect place for you!

Situated in Santa Cruz County, Arizona, United States, this little town offers something for everyone. Whether you’re looking for a new place to call home or simply want to explore what Tumacacori has to offer, you won’t be disappointed.

This article will examine the history, contemporary way of life, and benefits of living in Tumacacori. We’ll also talk about the effectiveness of the local government, the fun things to do, and the expense of living in this city.

The history of Tumacacori dates back to the late 17th century, when Spanish missionaries established a mission in the area. This mission was dedicated to St. Joseph and was known as Mission San Jose de Tumacacori. Today, this mission remains one of the most historically significant landmarks in the town.

The mission was established by Father Eusebio Kino, who built the mission on the east bank of the Santa Cruz River to convert the Native Indians to Catholicism, establish a self-sufficient farming community, and earn money for Spain.

However, the mission was abandoned during many Apache assaults in the 19th century that killed local farmers and ranchers and halted the expansion of the region’s economy.

As a result, the later Franciscan mission—now preserved as a ruin in Tumacacori National Historical Park—was never rebuilt. The most notable event during this period was the siege of nearby Tubac in 1861.

The name “Tumacácori” comes from the O’odham word for “place where the wild chiles are gathered” and refers to the hot chiles harvested on-site.

The Life of Tumacacori Now

Tumacacori is a small town of just 2 square miles (5.1 square kilometers) located in Southern Arizona, very close to Sonora, on the border between the United States and Mexico. Tumacacori shares boundaries with Tubac to the north and Rio Rico to the south.

Tumacacori is a community closely knitted through the following:

Tumacacori-Carmen, Arizona is a predominantly White community, with Hispanics being 96.7% and non-Hispanics at 3.3%. Tumacacori is home to several businesses, including a grocery store, a gas station, and many restaurants. There is also a church and a school.

Social life revolves around family and friends, and religion plays an essential role in the community. Tumacacori is a close-knit community where everyone knows each other. Life here is simple and pleasant, and the people are friendly and welcoming.

Tumacacori hosts numerous social gatherings throughout the year, some of which include Junior Ranger Day, the Annual Fiesta de Tumacácori, and Día de Los Muertos.

Cost of Living in Tumacacori

Compared to Santa Cruz County, which has a lower cost of living 18.4% lower than the national average, the average household income is $38,802, and the average individual income is $17,900. The tax rate in the county includes sales tax and income tax, at 7.6% and 4.2%, respectively.

However, despite these, Tumacacori is a great place to live. Read on to know why.

Tumacacori offers some of the most beautiful and affordable homes. Starting from around $150,000 to $550,000, you can choose from a wide range of single-family homes and luxury apartments. Tumacacori has something to offer everyone.

Most homes in the neighborhood are old buildings being renovated to suit the needs of the buyer or renter. The median home price in this neighborhood is $558,200, and the median rent is $658 per month.

Reasons to Live in Tumacacori

Tumacacori provides a safe and welcoming neighborhood for kids to grow up in. The neighborhood has a warm and engaging community that welcomes new residents and tourists. There are plenty of festivities and activities that allow everyone to meet and have fun. The city is also located near Tucson, which offers several additional amenities.

Some of the attractions in Tumacacori include:

The park was established as Tumacácori National Monument on December 18, 1908. In 1990, Congress re-designated it as a national historical park. Tumacácori is now one of more than 400 units administered by the National Park Service, including nearly 70 national parks.

The Tumacácori National Historical Park ruins are located six miles north of Nogales, Arizona, and nine miles south of Tubac, Arizona. The site includes a visitor center with an exposition on the history of the site and the people who lived there. There are also many hiking trails available in the park for visitors to explore.

If you’re an art lover looking for a place to collect or work on your art, the galleries and sculptures in Tumacacori are breathtaking. The detail and composition of the art pieces are incredible. The galleries are great places to take photos, and the sculptures add to the galleries’ charm.

In Tumacacori, Avalon Organic Gardens & Ecovillage is more than just a place to grow food. It’s a community of people who are committed to working together to create a sustainable future.

Tumacacori presently has no school within its borders. Nonetheless, It is one of the most educated neighborhoods in the region. Neighboring communities such as Tubac, Rio Rico, and Nogales all have highly-rated schools that serve the educational needs of Tumacacori.

If you’re looking for a great place to live with your family, Tumacacori is a perfect choice. With its low crime rate, high quality of education, and abundance of amenities, there’s nowhere better to call home. 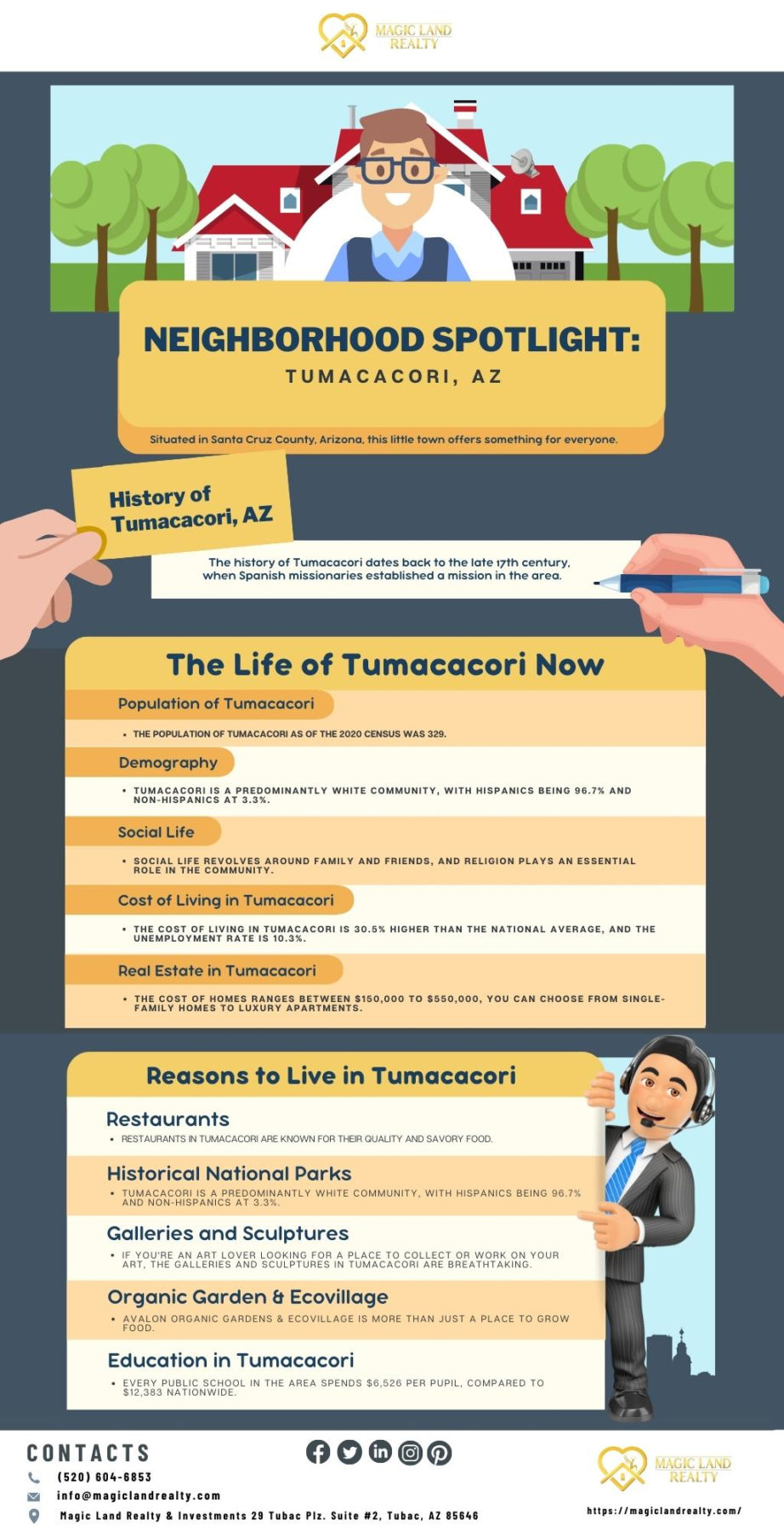 We are not natives of this state, but a visit here made an irrecoverable impression on us at some point, and we decided to move here and own some good properties.

Believe us, the scenery here is breathtaking, and we’re passionate about satisfying your personal and professional needs by presenting to you a collection of extraordinary and gorgeous homes.

Feel free to reach out to us today and let’s start discussing how you can enjoy the benefits of this beautiful town.

The neighborhoods in Tumacacori are close-knit communities where everyone knows each other. Life in Tumacacori is simple and pleasant, and the people are friendly and welcoming.

How do I get to Tumacacori?

The best way to get to Tumacacori is to take Interstate 19 south from Tucson. The park is off Exit 29 and can be reached by following the signs to Tumacácori National Historical Park Road. Once you arrive at the park, there are parking lots and trails available for visitors to explore.

What are the best things to do in Tumacacori?

Tumacacori is a pure landlocked area with a tremendous landscape view. The city’s major attractions include the historical national park, galleries and sculptures, and the Avalon Organic Gardens & Ecovillage. A visit to these places would be worth your while.

Are there any festivals or events in Tumacacori that I should check out?

What is your favorite restaurant or attraction in Tumacacori?

Wisdom’s Cafe is one of the best restaurants in Tumacacori. The food they serve is healthy, the portions are big, and it’s a combination of local recipes.

Are there any areas of improvement you would like to see in Tumacacori?

The real estate part of Tumacacori needs to be developed by getting more investors into the area to build more facilities like schools, parks, and hospitals. Companies also need to move into the area to create more job opportunities and drive traffic to increase the population of the community.